It is often said that United States is a more violent nation than most European countries. Look at the murder statistics, and the statement looks like it has weight. I used to think that comparing an individual European country to the entire US did a disservice to America. Some regions were obviously more violent than others in my mind, however, this data seems to suggest that while certain states have low murder rates, regions in general are pretty uniform across the board. Based on the murder rate alone, the US is indeed a more violent country than most Western European nations.

Looking at just the murder rate, the discussion would be relatively short. However, I became interested in other violent criminal statistics and what I found was interesting. For my data I went to the European Union data information portal for both the European Unions and America's violent crime rate so I hope that any European readers might not think this as a 'statistical' hit and run using questionable information. Now a few things.

First off, how crimes are recorded are different between each nation, so I will admit that this could potentially skew the comparisons between the US and Europe and between individual European nations to each other.

Second, when I created the violent crimes per 100,000 individuals I used the latest rounded census information I could find. This could potentially cause the data to be skewed because of varied population growth rates. However, outside of the US, population growth was relatively minimal. This does mean that violent crime rates will be understated for America coming up to the years approaching 2010; but realistically I don't think it affects the data that much.

Lastly, I would have liked to find a break down of different types of violent crime, however, the EU data portal does not break the data down this far.  It's disappointing since there could be an instance where a nation could have a higher violent crime rate but have its violent crime be a lesser type (I am thinking assaults attributed to bar fights versus rapes). Or even more pertinent, some nations would list threats as violent crime, while others would not. There is little I can do about this, other than go over each nation's definition, and in the future I may do that. But I am not going to do so today (and to be frank, I am not entirely sure that the different definition make a huge difference. But I could potentially be wrong).

Now a definition on what violent crime is in the US. In America, violent crime covers homicide, rape, robbery, aggravated assault and simple assault.  In short, any experience where significant bodily trauma occurs outside of robbery. I highly doubt victims of gun/knife point robbery would see their experience as not being violent. Now for the charts. 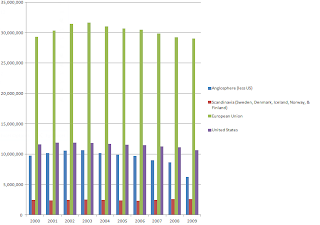 As we can see, when comparing the US to the EU, the EU has a far higher instance of crime. But using this data alone would be disingenuous since the EU has two hundred million more people than the US; basically the equivalent of two extra Mexicos. Because of that we need to normalize the data. I did this by taking the data I used to make this chart and then normalizing them to come up with violent crime per one hundred thousands individuals. 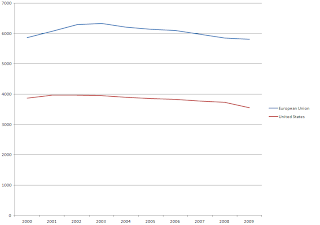 Having normalized the data we still see that there is a significant difference between the European Union and the US. The EU has a violent crime rate nearly a third higher than the United States. At this point we can say, assuming my data is in the ball park, that while the US has a murder rate far higher than the EU it has lower instances of other violent crimes relative to the European nations. I will admit that I was surprised at this point, I had assumed that there would be lower instances of violent crime than the US, but the data points in the opposite direction. So I decided to take a look at some other European nations.

I decided to try to get two groups of bodies together. One was the Anglosphere, less the United States, which would be the United Kingdon, Australia, New Zealand and Canada. The other was Scandinavia. I picked Scandinavia because it often fairs very well in terms of corruption, economy, democracy and stability. Scandinavia is well known as a collection of nations that are very safe to live in. I was surprised to see that their combined instances of violent crime was more than double that of the US. And that the Anglosphere had a violence rate about a 1/5th of Scandinavia. I had thought that the general cultural make up of Anglo nations would be more predisposed towards violence. But the data suggest otherwise. It was very interesting and confusing. I decided that one of the Scandinavian nations must be skewing the numbers upwards and so I decided to take a took deeper look. 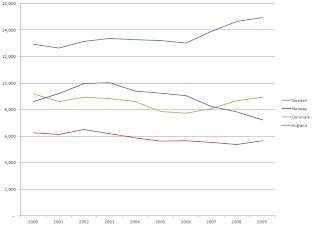 As we can see, there was a nation skewing the data and to my surprise it was Sweden. But then Save Capitalism might have something to say if his post earlier this week is indicates anything. Nevertheless, I was surprised by the data. Sweden is often held as an example of what the US should be by many academics of left leaning individuals.  It is progressive, economically healthy and tolerant. I, like many other Americans, simply assumed that Sweden would be a much less violent nation than the US.

Even more interesting is that the United Kingdom, known as the violence capital of Europe (at least Western Europe) is comparable to the other Scandinavian nations. The data I have seen so far suggests that the UK isn't as nearly as violent as portrayed, unless the Danes and Norwegians are far more violent than American media lets on, and this data warrants a deeper look at Europe as a whole because for some reason Europe has higher instances of violent crime than the US (once again assuming my data isn't horribly flawed).

So is America really as violent as we in West believe? The data would suggest otherwise, though the murder rate here is intolerably high relative to European nations and one could say that having higher violence but fewer murders is preferable. So the question is why? Left leaning bias is certainly one of the reasons in America, and our news media certainly doesn't help with that depiction.  As for the European view that we are more violent there is the additional factor of our 'American mystique'. The mystique being that Europe has never completely let go of their colonial and wild west notions of the US, where the land was violent and untamed, and law could barely be enforced within the towns much less the countryside.

One final point needs to be made. The argument over which nation is more violent is largely academic. The point is that in most parts of Western Europe and the US you do not have to fear harm coming to your person. There are parts of cities across both sides of the Atlantic that would be foolish to reside in for very long after dark, but the fact is that the violence levels in both continents are far lower than they are in other parts of the world (save parts of East Asia). Either way, whether the US is relatively more violent than the EU or vice versa, I wouldn't be in a rush to install iron grates in your windows in either parts of the world.


Posted by Cogitans Iuvenis at 6:36 AM

Disagreements and countervailing views are welcome, however, comments will be deleted if:

-They have emoticons.
-If it is obvious that you have not read the post.
-Obvious Spam, and it takes me about a quarter second to determine if it is spam since you all write your comments the same way.

Cogitans Iuvenis
Seattle resident whose real name is Kevin Daniels. This blog covers the following topics, libertarian philosophy, realpolitik, western culture, history and the pursuit of truth from the perspective of a libertarian traditionalist.

Death of a Republic


Finished Reading This Year:
Enjoy the Decline
A Throne of Bones
The Way of Kings
War Dogs Coin
The Last Witch King
The Twelve Caesars

To Read List:
The Revenge of Geopgraphy: What the Map Tells Us About Coming Conflicts and the Battle Against Fate
Emerging Economies: Geopolitics of the BRICS Nations
As I Walk These Broken Roads


Free Man Reading List:
-The Bible
-Freakonomics
-The Peasant Prince: and the age of revolution
-Alex Storozynski-Priceless: The Myth of Fair Value (and How to Take Advantage of It)
-William Poundstone-Economics in One Lesson: The Shortest and Surest Way to Understand Basic Economics
-Henry Hazlitt-About Face:
-Angelo Codevilla
-Federalist Papers
-Wealth of Nations
-Second Treatise of Goverment
-Reflection on the Revolution in France
-A Vindication of Natural Society
-The Prince and the Discourses
-The Conscience of a Conservative
-Anarchy, State and Utopia
-The Road to Serfdom
-The God of the Machine
-What's Wrong with The World
-Outline of Sanity
-Liberty Defined
Time for Choosing
The Manipulated Man
Self-Reliance
Thus Spake Zarathustra
How I Found Freedom in an Unfree World